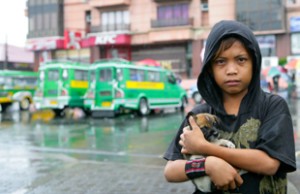 Amsani, 12, holds one of his familys three puppies, in a parking lot for jeepneys (a combination of jeep and jitney), in Metropolitan Manila (National Capital Region). Amsanis father is a jeepney barker (one who helps solicit passengers); Amsani and his siblings do odd jobs including as parking attendants, cleaning jeepneys and repackaging fruits and vegetables. The family pays 60 pesos (US$1.20) to sleep in a broken pedicab at night but hopes to sell their puppies for 500 pesos (US$10) each in order to rent a permanent shelter. We need to sell the dogs so we can have a roof over our heads, even if just for the rainy season, Amsani said. He is currently learning to play guitar during weekly Rock Ed sessions  a programme, sponsored by Deutsche Bank in association with the international NGO Childhope Asia Philippines, that teaches music to children living on the streets. In June 2011 in the Philippines, an estimated 250,000 children live and work on the streets, at increased risk of being trafficked, enduring abuse and sexual exploitation, forming dependence on illegal drugs and other harmful substances or coming into conflict with the law. To highlight their situation, UNICEF and the Department of Social Welfare and Development, accompanied by President Benigno Aquino III, launched the book A Journey with Children: Living and Working on the Streets in the Philippines in October 2011, at Malacanang Palace in Manila, the capital. The book documents the lives of some 45 children who live on the streets in cities throughout the country. All children who participated in the project continue to be followed by local governments and NGOs who help protect them. The perilous situation of children living on the streets is compounded by the challenges affecting the majority of Filipino children. While the country has reduced under-five mortality by 44 per cent since 1990, more than a third of under-five child deaths are still caused by preventable illnesses,